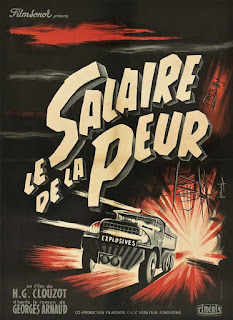 The first time I tried to watch The Wages of Fear, I stopped halfway through, finding myself unengaged with the film. I don't know why: maybe I wasn't paying attention to it, doing other things at the same time. The copy I saw was also unrestored, the quality rather scratchy looking. But its on the 1001+ films list, so I knew I would have to try again.

And this time I was entralled. Though the quality was no better, I found myself interested from the outset, unlike last time where I wondered where the story was going. The film does take a while to get to the suspense-laden drive it is rightly famous for. But the long build-up allows us to see the lives of the men who undertake such a risky job. They are part of the diaspora who live in Las Piedras, and anything is worth risking one's life to earn money.

The conceit of the story is a simple one; driving explosive material across unforgiving terrain, and its simplicity works well in the film's favour. Clouzot paces the drive well, allowing time for the characters, and the audience, to breath after every dangerous scene. Many see Clouzot as the French Hitchcock, and that is high praise. Clouzot's film is more political than Hitchcock's take would have been, and there is a real grittiness to the journey.

This is a great suspense-thriller that is not just about rattling the audience's nerves. It also asks us what price is a man's life, and how much does he (or she) risk in pursuing money. Watch with something, or someone, to grip onto during the tense moments.
Posted by Julia Mac at 05:41