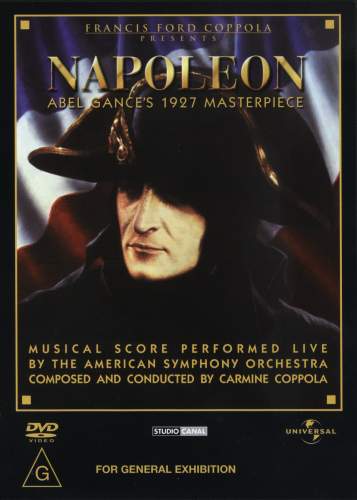 Filmmakers, unfortunately, don't make biopics like this anymore. Rather than attempt to recreate every event in Napoleon Bonaparte's life, aim at historical verisimilitude, or try to probe into the psychology of this famous character, Gance opts for operatic mythologising. From the opening moments of this epic sweep, we see stirrings of greatness in young Bonaparte, a greatness not recognised by his (snobby) peers. As someone who grew up on English history and comedy, where Bonaparte was the butt of jokes, and the great enemy of Britain, this heroic depiction of the French emperor made my experience all the more fresh and interesting.

I saw the three hours, forty-five-ish cut of the film, with a fantastic score by Carmine Coppola. Incorporating themes from other famous composers, with "La Marseillaise" a constant throughout, the music helps strengthen the epicness of the story. It is particularly masterful in the scene where de Lisle teaches the masses to sing the anthem, their silent voices in time with this famous tune. With its use of French Impressionism techniques, Gance's film feels alive and fresh, the camera moving around with great energy; the scene of Bonaparte being swept around by a storm at sea intercut with scenes of discontent at the National Assembly represented by a swinging camera was a personal favourite.

I really liked this. While long, it rarely dragged, and though I know the ultimate outcome of this period of history, I was swept along by the bravado of the storytelling. It has been added to my list of films I want to see on the big screen, ideally with a live performance of Coppola's score.