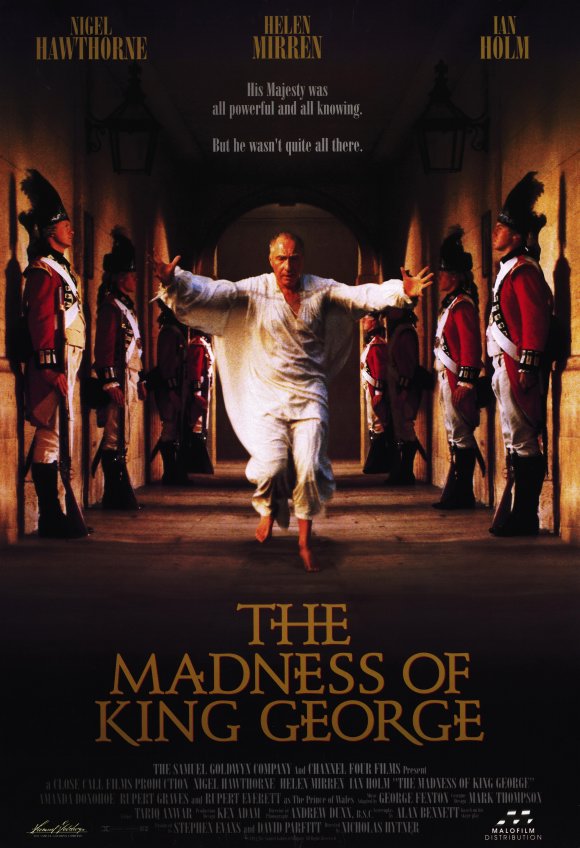 When watching British films, I like to play the game 'How many people do I recognise from the cast, and what else have I seen them in?' I sit there thinking "Oh, there's 'so and so' from 'that thing,' or 'Ha, those two were husband and wife in something else, here they are mistress and servant!' Hytner's film, with its expansive cast of British thesps provided ample opportunity for such games.

The film is lavish yet intimate, with its focus on the medical emergency of King George III, who eventually went mad and was replaced by his son as Prince Regent. Like all films about royalty, the personal and the political are inextricable, with choices about marriage, health, and friendship affecting the country (apparently).

The performances are all good, with Nigel Hawthorne managing a difficult role well: he at times has to move between madness and cognisance in one scene. The supporting cast are good at reacting with bafflement and concern, and Rupert Everett is having fun as the opportunistic Prince George (with a shockingly awful head of hair).

The script is naturally strong, coming from the pen of Alan Bennett, but I spent much of the film wondering how it would work on stage, and think that it would be more impressive acted in a small space where that confinement would intensify the story. This is a solid historical drama that, similarly to The King's Speech and The Queen, dramatises a real life crisis for the English monarchy. Enjoyable, if lacking great depth and insight.
Posted by Julia Mac at 04:46