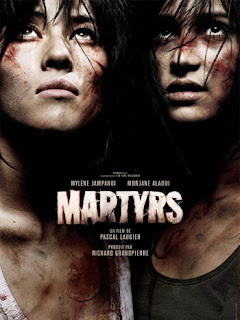 Fifteen years after escaping captivity as a child Lucie, accompanied by her friend Anna, breaks into an apparently normal middle-class home and murders the mother, father and two teenage children in a brutal killing spree. We know that this family is somehow related to Lucie's earlier captivity, which was extremely abusive and traumatic, but we are left wondering what exactly was their role, and why they kept and abused a child. Was it sexual sadism? Some form of horrific parenting? The film offers few answers, and raises even more questions as Lucie sees visions of an emaciated human-like creature that appears intent on killing her. At the halfway mark of the story, something happens that completely changes our ideas about what we have just seen, and unleashes a rather different plot, one that is extremely difficult to watch in its brutality.

I am being hazy with the details of Martyrs as it is a film best going in not knowing what will happen, as I did. The film is certainly not for the faint-hearted, and offers no real let-up from the horror it presents to the audience: no moments of humour or levity. I imagine this could be too much for even some of the keenest of horror fans. It is bleak.

If you have the nerves and stomach for it, this is an interesting horror film, one of the more smarter torturous stories out there. But it is uncomfortable, deeply unpleasant, and will remind you of the horrible things humans are capable of doing to one another.
Posted by Julia Mac at 07:55