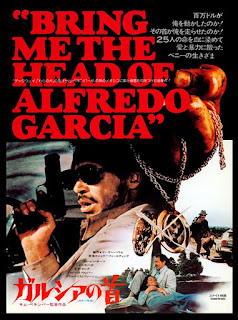 The title of Peckinpah's film is eye-catching, making you wonder who is Alfredo Garcia, what did he do to risk losing his head, and who will go and get it. Being a Peckinpah film you can expect the answer will come with a lot of violence, including multiple shoot-outs. The story focuses on the getter of head, Bennie, and the cost this expedition has for him.

I haven't warmed to Peckinpah's style. I do admire the way he shoots violence, which is impressionistic, with its slow-mos overlaid with loud gunfire, disorientating you as though you were part of the action. He does also focus on interesting characters. My problem is the story is often not as compelling as it could be, and as someone who tires of too much violence quickly (unless it is in horror), I get tired watching his films. All this is true of Alfredo Garcia.

I can't say much more about the film because it didn't grab me. I watched it a few weeks ago, and haven't thought about it since. Peckinpah clearly has his fans, several of his films appear on the 1001+ Films lists, but he doesn't do much for me.
Posted by Julia Mac at 02:13