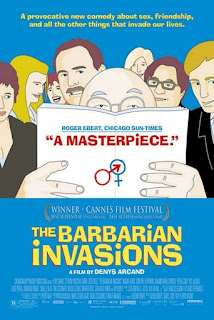 I usually try to watch sequential films in their correct sequence, but in in the case of The Barbarian Invasions the first film The Decline of the American Empire wasn't available on the same streaming service. So I broke my rules and watched this before it disappeared. That was probably not a good idea.

At times it felt like I was at an event where everyone else knew each other and had private jokes that went over my head. This made it hard to really get into the story and its characters, who I also found slightly tiresome. The generational "war" between Sebastien and his father Remy is almost too broadly played, with the younger man displaying all the intellectual shallowness of a neoliberal Gen X, while Remy's lefty politics hasn't moved on to embrace modern feminism
.

The film is not entirely on the nose. The development of the two men's relationship is nicely played, and the ending is suitably moving. But my frustrations with the characters stopped it from really touching me. Perhaps if I had watched the first film I would have cared a little more, though from what others have written about The Decline of the American Empire, I may find it even harder to enjoy.
Posted by Julia Mac at 23:30