Great Southern Land Films: Based On: My Brilliant Career (1979) 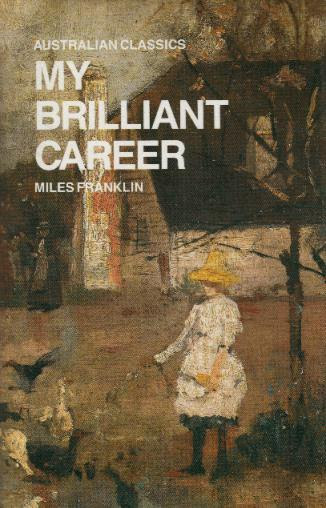 In the 1970s Australia elected a progressive Prime Minister in the form of the late Gough Whitlam. His sweeping reforms of many aspects of Australian life included greater funding to the arts. The result was a boost of film activity which led to Australia experiencing its own New Wave along with many other countries. Gillian Armstrong's My Brilliant Career (1979) is an example of one of these films. It engages with contemporary (at the time) ideas about feminism, despite being based on a novel published in 1901.


The novel itself, though proffering some comment on women's place in the world, focuses just as much on the problem of living in a beautiful but fairly cultural-less part of the world. Sybylla Melvyn longs for a 'brilliant' career, be it music, stage or writing, and western New South Wales is rather scant on that. Her family has come down from being respected farmers to barely surviving off the land. She is invited to stay with her wealthier grandmother at Caddagat, where she meets Harold Beecham, a young farmer owner who appears to be interested in our uncouth heroine.

The film heightens the romance of Harold and Sybylla's relationship. In the book, Sybylla is certain that she will never marry, and only promises to marry Harold when she thinks she may be of use to him; hardly a romantic reason. In the film, the temptation appears to be greater. There is more physical contact between the two. The sound also adds to the romantic vibe; when Sybylla and Harold are having a pillow-fight (a scene not in the book), we hear sweet song as they run through picturesque gardens. There is also a scene of romantic kissing at sunrise by a river.

One could argue that the love story in the novel is not very romantic. Very little 'romantic' language is passed between Sybylla and Harold. It is more a battle of wills, and Sybylla trying to live according to what she knows about herself. She also hates being touched, and Harold only comes close to kissing her once towards the novel's end.

As with any film set in a historical past, the costumes come to the fore; we are highly aware that these characters are living in a different period. This creates a distance that is less overt in the novel. We are thoroughly ensconced in Sybylla's first person narrative that the reader sometimes forgets what era with are in, only noticing when she talks about carriages or the ball. In the film, in any film that is set in a historical past, you are always aware about the time period.

The costumes also add to the romance of the story. Almost every period drama has some element of romance, if not being the actual subject of the story. Lace, bouffant hair-dos, corsets, structured suits and men on horses play into the romantic imagination. Of course, this film does occasionally undercut some of the romantic moments. Sybylla deliberately undermines a cliched romantic moment on a boat; just as they are gazing into each others eyes she capsizes the boat, ruining the moment, and their clothes. The squalor of Sybylla's actual home and at M'Swat also undermines this romantic image of the past, reminding us of what life was like for most people.

The greatest change from the novel is the ending of Sybylla's life working as a teacher/governess. In the film Mr and Mrs M'Swat believe that Sybylla is setting her cap at their eldest son; her open, chummy-ness being misconstude again. In Franklin's novel however, Sybylla becomes increasingly ill living with the family. She is physically, emotionally and spiritually starved. The M'Swats are kindly concerned for her welfare and send her home, dismissing the debt Sybylla's father owes them. Why change it, you may ask?

The film wears its feminism on its sleeve, and engages with the narrow avenues of life available to women more overtly. Enhancing the romance makes complicates Sybylla's desire to be independent, offering her a very tempting path for the more traditional life. In the novel, Franklin presents Sybylla as someone who would not cope with the drudgery of living in an uncultured backwater. In marrying Harold, she would still be stuck on this part of the world, though better off then many others.

This is an interesting story that explores the unease of a culturally hungry woman living in the harshly beautiful Australian outback, putting it in the second of my Australian film categories (for a refresh, go here).
Posted by Julia Mac at 20:39

Email ThisBlogThis!Share to TwitterShare to FacebookShare to Pinterest
Labels: Aussie Films, Based On, Feminism, Romance