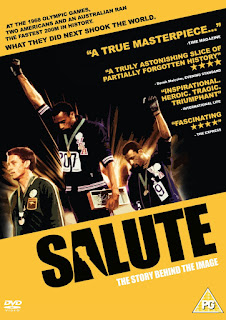 Salute tells the story behind one of the most famous images in the world: the Black Power salute performed at the 1968 Olympic Games. In the photo John Carlos and Tommie Smith stood each with one hand in the air,, wearing a black glove, providing a powerful statement in support of the civil rights movement. Standing with them is Peter Norman, a white Australian runner, who is wearing an "Olympic Project for Human Rights" badge along with Smith and Carlos, evidence of his support for their cause. The film, made by Norman's nephew, tells the untold story of one of Australia's most successful runners who is still sadly rather unknown in Australia (I did not know about him until I watched the film).

Salute explores the context of civil rights in both America and Australia in the 60s, drawing parallels between the two to explain Norman's sympathies with the American situation. It also outlines Norman's life, particularly his Christian faith, which for him meant that all people were created equal, which lead him to abhor the racism in Australian society at the time (we had something called the White Australia Policy, and it was despicable). Carlos and Smith speak with great love and gratitude for Norman, with both delivering heartfelt eulogies at Norman's funeral.

This is one of those films that works to show us how far we have come in regards to human rights, and also how much more still needs to be done. The response in America to black footballers taking the knee (a peaceful and rather respectful protest which was met with a furious blacklash from some) shows that people still bristle at sport and politics mixing. Salute is a reminder of the need to stand up for what it right, even thought the cost may be terrible; all three runners suffered set-backs in their careers after the event. It also encourages us to reach out to one another over things that supposedly divide us - gender, colour, sexuality, even nationality - and recognise the inherent humanity that binds us all. It is an inspirational film about three inspirational men.
Posted by Julia Mac at 21:07